The SWF file format (pronounced "swiff") delivers vector graphics, text, video, and sound over the Internet to AdobeFlashPlayer software. The SWF file format is designed to be an efficient delivery format, not a format for exchanging graphics between graphics editors. It is designed to meet the goals of On-screen display, Extensibility, Network delivery, Simplicity, Scriptability, Speed, Scalability.

This guide is written for Apple TV users to explain how to play back your favorite SWF Flash files on the Apple TV at home. The guide is easy to follow and doesn't require technical knowledge of multimedia.

What is Apple TV?

Apple TV is a digital media receiver designed, marketed and sold by Apple. It is a network device designed to play digital content originating from any Mac...

For Apple TV users, you can either buy movies and songs from iTunes store and transfer them to Apple TV, or find the proper video program to convert your favorite video files to Apple TV movie.

Moyea SWF to Apple TV is a handy utility that can perfectly convert Macromedia SWF files and Flash projectors to Apple TV video and iPod mp4 video for playback on Apple TV. It can, too, rip SWF to MP3, AAC, M4A, WAV audio files and support batch mode conversion. And its manual mode allows capturing interactive Flash for conversion. 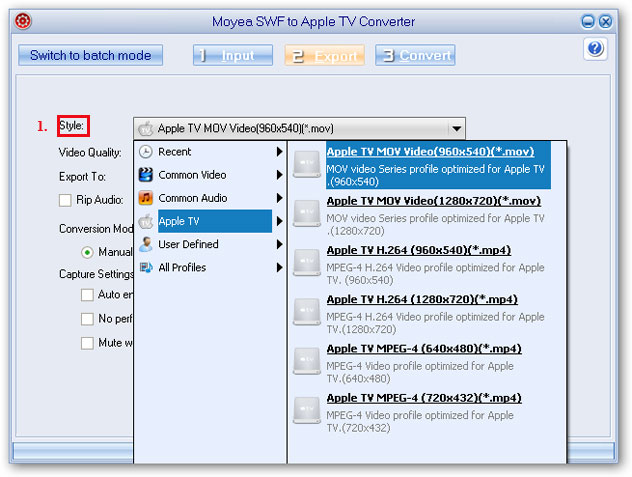 2. Moyea SWF to Apple TV Converter can rip SWF to MP3, AAC, WAV audio files for your other entertainment use. You only need to make sure that "Rip Audio" is checked, and then specify a folder to locate the audio file. After conversion, you will find the audio file the located folder.

3. Support batch mode conversion. If you are in the single mode, you only need to click "Switch to batch mode" to turn to batch mode. With batch mode, you can convert multiple file at a time without manual interference. 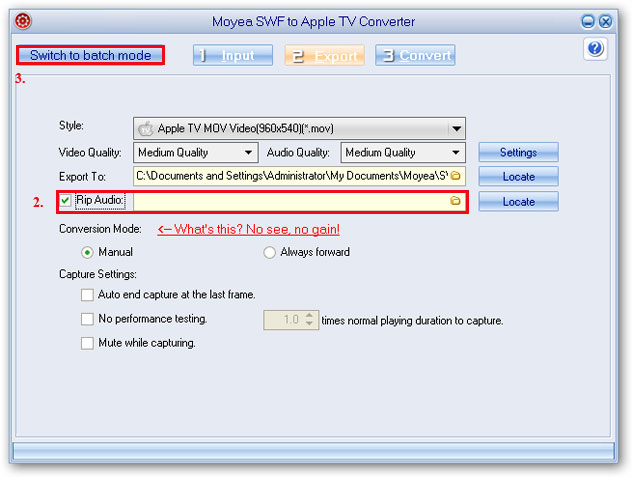 Moyea SWF to Apple TV Converter also allows interaction with Flash content during the conversion and there are no frame skips in the generated videos. Besides, its Play-and-capture technology allows users to decide the beginning frame and end frame to capture for conversion to meet their needs.